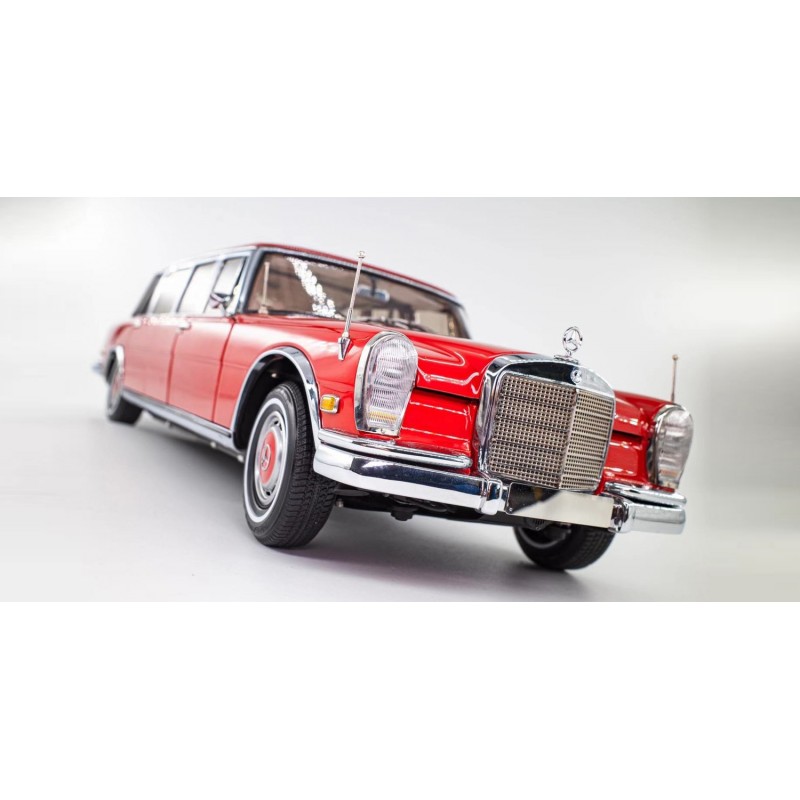 At the 1963 International Motor Show (IAA) in Frankfurt, the Mercedes-Benz 600 was found on such a cutting edge of technology that it took breath out of experts. In the development of the 600 Pullman, the goal was to come up with a car that went beyond what appeared technically feasible. It testified to the commitment to a motto that proved inspiring back then and remains so even today: “Be the best or nothing.” The 600 was not only unparalleled in technical terms, but also the fastest-running sedan of the time despite its size and weight. In the early sales documents, the car was called “der Große Mercedes” (the Grand Mercedes), a moniker originally used for the Mercedes-Benz Type 770, which stood out as a gem from the vehicles of the 1930s.The model with the internal factory code W 100 was built in two basic versions: a four-or five-seated sedan with a short wheelbase (3,200 mm) and a six- or seven-seated.Pullman limousine with a long wheelbase (3,900 mm) and a cabin partitioned off by a divider panel. There were two types of Pullman limousines, too: the 4-door edition with two mid-row single seats facing the rear bench seat that had a central foldable armrest, and the 6-door edition with two mid-row jump seats facing forward and a rear bench seat with a middle foldable armrest. Until the end of production in 1981, the series remained virtually unchanged in appearance.Mercedes-Benz 600 vehicles were rarely delivered in a striking paintwork. The “Red Baron”, after which CMC modeled this replica, is an exception. It was sold to the comic artist Charles M. Schultz of the USA in 1972, who chose to present one of his famous comic characters on the flag poles. Later the car went to the possession of a prominent hotel chain owner in the United States. It was equipped with four doors and two mid-row single seats facing the rear bench seat.

• Authentic replication of the V8 engine, including all ancillaries

• Detailed replication of the subframe and reinforcement

• Detailed interior decked out with leather upholstery and wooden embellishments

• Curtains on the rear windows